Last year, I focused much of my surplus anxiety on cinema. I expanded my streaming subscriptions and watched movies constantly and compulsively. It was a desperate but also a pretentious mode of consumption. I thought that, over time, as I racked up Antonionis, Kurasawas, and Bergmans, I was internalizing masterpieces, introjecting the cannon, adding image after image to my psychic and emotional vocabularies, making a better me.

Eventually my native tastes took over. The art house gave way to natty noirs and genre curiosities. Self-actualization, to mix psychological modalities, lost out to the pleasure principle. All that matters to me now is novelty and cheap diversion. I’m too tired to cast for depth. I want sideshows, genre-fare, and oddballs but only in such proportions that I don’t have to think very hard about any of them.

Which brings me to Croupier (1998), a decidedly un-shadowy bric-a-brac whiff of noir pastiche directed by Mike Hodges and starring, well, bear with me for a second and just do what I say.

Close your eyes. Picture Clive Owen, mid-thirties but playing a somewhat younger man. His hair is dyed bleach blonde. He wears pinstripe suit pants, suspenders, a plain gray sweatshirt—the kind you’d wear for a long fall jog if you were in the witness protection program—and, sometimes, a flat-brimmed fedora. He smokes French cigarettes at the rate of about two a minute. He has a fire-engine red phone and a turn-of-the-century word processor with a tiny screen; it is very small device but probably weighs about 11 pounds.

Blond Clive Owen (BCO) is only around for twenty minutes or so, so you must savor him while he’s there. BCO is a writer whose only apparent relationship to literature is a passage from Hemingway's A Farewell to Arms, which he quotes twice, in booming hardboiled voice over. BCO is an ex-casino hand who used to live and work in South Africa for some reason and who briefly tries (and fails) to write a “soccer novel” while living with a girlfriend of convenience named Marion. After getting a nudging reference from his disappointing and dishonest father, BCO gets a job at the Golden Lion Casino, dyes his hair black, and the movie is effectively over.

Clive Owen, whether blond or black, plays a character named Jack Manfred. The nomenclatural connotations here are not expansive; it is like saying Guy Male Name. Jack eventually discovers and embraces a more daring, creative, and morally plastic version of himself, an alter ego named Jake, which is elaboration without much difference. This Jack/Jake* character resolves not to gamble but observe the spectacle of addiction and desperation from the croupier’s privileged and Zeusian remove, and eventually write a book about it, using his own lantern-jawed observations and experiences as the basis for it. Along the way, there is plenty of casino intrigue—cons, betrayals, gambles large and small—and a twist ending that makes Jack/Jake look back on his relationships with bemused but cynical appreciation. But none of that matters because BCO, the real treasure, that brief but thrilling oddity, like the flash of rare and exotic bird through your peripheral vision, has fled.

* These are standard names choices even within the silly subgenre of writer’s block movies; see Jack Torrance from The Shining and Jake Briggs from She’s Having a Baby. 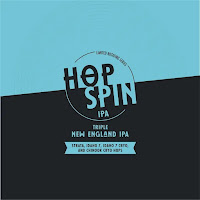 “This beer is #2 in our limited Hop Spin series, but it’s easily the #1 biggest IPA we’ve ever made. At 10.1% ABV, this massive Triple New England IPA has the rich, thick, and full body necessary to support an amount of hops bordering on irresponsible. Strata and Idaho 7 hops are bursting at the seams with bright notes of passion fruit, papaya, and grapefruit. Buckle up before taking this one for a spin.”

The first thing you notice as you pour one of these is the smell - inviting tropical, citrusy aromas that belie the alcoholic punch this beer packs. In the glass, it’s an opaque light orange fading to yellow almost like a slightly watery orange juice with pulp.

Tasting this, you are treated to tropical flavors underpinned with notes of grapefruity citrus that give way to a pleasant slight alcohol burn. Somewhere in the middle the hoppiness comes through, and in true New England IPA fashion, doesn’t overburden the beer with bitterness. The longer the beer was in my glass the better these flavors integrated. With a mouthfeel like a down comforter for your taste buds - heavy, soft, and welcoming - this thing goes down way too easy, truth be told.

Upon drinking the first one of these, I was suddenly transported back to my first experience with alcohol. I was a freshman in college (yeah, how does a mid-Michigan boy make it that far without drinking? I don’t really know either) and my roommate and I had found someone to buy us some alcohol and we settled in for the evening. A short time later and a few screwdrivers into the night I found myself flailing around on my back in the kitchen like Gregor Samsa, drunk on cheap orange juice and even cheaper vodka. Flash forward two and a half decades, and here I am enjoying this beautiful, balanced collaboration between alcohol and citrusy goodness all the while remaining upright. While I’ll never forget drinking those long-ago screwdrivers, this beer will stay with me for all the right reasons. Insight announced that the Hop Spin series would be a year-round endeavor, and with the success of the first two, I look forward to the release of number three in the series.