Two Poems by Based Mountain

No two artists starve alike
But nobody should starve
Artist or janitor
American or Kongo
Crispr is for food
Genetically modified humans
Are not food
No matter what soylent green says
Fucking soylent green
Always playing the clown, soylent green

Meanwhile in the DMs

KM is showing me pictures
of her legos
it looks like han solo is 100ft tall
it reminds me of paintings
where perspective ain't shit
my favourite kind of paintings
i show her momkyio's tigers
the strokes are so fine
are so numerous that the fur is naturalistic
but the head is flat and the ears are flat
and the smile is anything but flat
we laugh and then i eat a kitkat
crunch crunch crunch...crunch
...crunch crunch?      Crunch!
Based Mountain 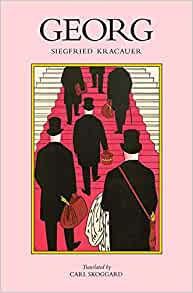 Georg by Siegfried Kracauer
translated by Carl Skoggard
available from PS Hudson
Georg is a brisk, funny, and pretty grim novel about trying and failing to find one's place in a confounding world.
Readers follow Georg, our titular 20-something Everyman, as he drifts from chance encounter to chance encounter, embroils himself in a dreamy, dead-end love affair, and falls more or less by accident into the role of reporter at a newspaper, the Morgenboten.
This last development allows him some small exposure to civic and political life, a kind of public engagement the young man professes to seek. It's a wild, confusing society he covers, one that feels relevant to our own turbulent times. Georg's fumbling is both human and satirical, and at times he reads a little bit like Kafka's hapless K., doomed to remain forever outside the Castle.
In a bitingly funny revelation, all of Georg's reports are, unbeknownst to him, exactly what the paper wants to print for its own purposes and motives. The Morgenboten positions itself as a leading voice of the Left even as it borrows money from banks to stay afloat. Georg winds up serving the masters he says he wants to undermine, but how long can such an arrangement possibly last?
It's not spoiling much to say that Georg never finds his footing in this confused and dangerous world. He's rather shy and unsure of himself, which may indeed be to his credit given that he's surrounded by people full of passionate intensity, to borrow a phrase. The people he meets are full of conviction but are never quite convincing.
If Georg ends up the wiser for his travails, it might be something of a negative enlightenment, a kind of growing up or maybe just older, and the novel ends with a striking image of a society teetering into some new abyss. May we tread carefully or risk being swallowed up.
Georg by Siegfried Kracauer (trans. Carl Skoggard) is available from Publication Studio Hudson.